Savannah Sunrise slot was one of the first 243-way games in the 1990’s! Cryptologic developed it and it originally appeared at Intercasino. An African theme with the mighty Lion as the Wild symbol o reels 2 and 4. You need 3+ consecutive Tree scatters from reel 1 to trigger 20 free games and can be retriggered in the same way. During free games if the Wild on reel 2 substitutes in a win it is multiplied 3x and the Wild on reel 4 multiplies 5x. Should you get both, a 15x multiplier on the win! Like most Cryptologic multiway slots the RTP is 92-96%. 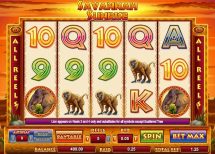 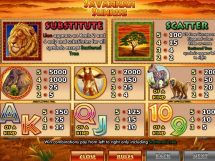