About 243 way slots: 243 way slots and other multiway games for example 1024 ways have become the most popular format in the online casino slot world. Although many European-based software providers such as Microgaming (30+ 243 way slots) and NetEnt (10+ 243 way slots) are the main producers of this type of slots in the modern era, 243 way slots were first seen in US land-based casinos nearly 20 years ago. When the games started to appear online, IGT’s ‘Triple Fortune Dragon’ was the first 243 way slot many players outside the US became familiar with. IGT were quick to see the potential about 243 way slots and gave games in this category a new name  – ‘MultiWay’.

What does MultiWay mean?:
As you will be aware most slots have fixed winlines in a pattern like in the image of Book of Ra slot. This particular slot from Novomatic only has 9 paylines, so winning combinations are less frequent. 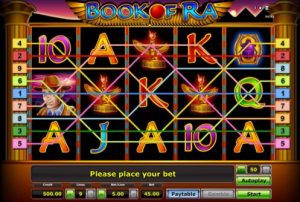 You must get 2 or 3 symbols from left-right fitting one or more of those paylines. So quite often you will see 3 symbols land on the first 3 reels and win nothing. They simply don’t line up.
A ‘way’ is different from a payline. The slot game looks almost identical in most cases, with 5 reels and 3 rows, but there are no paylines! You simply need consecutive symbols from left-right to win, in any position. So with 5 reels and 3 rows we have 3x3x3x3x3 (243) possible postions a 5-of-a-kind (5OAK) win can land in. A good example of a 243 ways slot is Triple Fortune Dragon from IGT. Note that the image of this game show no paylines down the side of the game and this is because there are none. 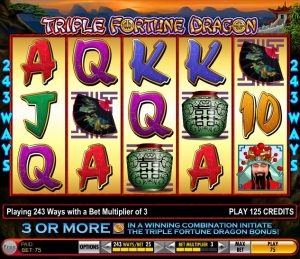 243 ways means there are no fixed paylines

This greatly simplifies things for the player, as when you see consecutive reels displaying matching symbols you don’t have to worry if they are on a winning payline. The 243 way design also brings extra possibilities when stacked symbols are included. If you had for example 2 aces reel 1 and 3 on 2/3 and then 1 on 4/5 you would have 2x3x3x1x1=18 5OAK Aces. Obviously this means the pays per 5OAK are lower than a fixed-line slot usually.

Famous 243 way slots:
Thunderstruck 2, Immortal Romance and Jurassic Park, all by Microgaming, are possibly the most well known 243 way slots. As well as having randomly-triggered wild reels feature like the ‘Wildstorm’ and ‘Wild Desire’ they also have bonus rounds, which by incorporating expanding wilds. greatly improve the chances of multiway wins. Netent’s ‘Twin Spin’ is a popular 243way slot which joins 2-5 reels each spin to increase multiway chances and with stacked symbols can and often does give a screen full of the same symbol therefore the maximum 243x5OAK win!

Progression of the 243way format
OK, let’s add another row to a 243way slot. We then have 4x4x4x4x4 (1024) ways. Microgaming’s ‘Leagues of Fortune’ being an example. Then we see Williams Interactive’s (WMS) ‘Raging Rhino’ which is the same but adds a 6th. reel so there are 1024×4=4096 ways! Unlike the previous games mentioned it is not possible though to actually fill the whole 4096 ways with the same symbol. IGT have also varied the theme with their ‘Siberian Storm’ and ‘Sumatran Storm’ series. These have odd reels 3x4x5x4x3 giving 720 ways. Netent have also enacted this on their ‘Wild Rockets’ 720way slot. The ultimate in multiway is Big Time Gaming’s ‘Dragon Born’ which has a maximum of 7x7x7x7x7x7 ways over 6 reels, a massive 117649 ways! These are known as ‘Megaways’ games.

Regardless of these exaggerations of the multiway idea, the principle is the same: any consecutive symbols left to right. Some games even add ways in the bonus rounds, like Terminator 2 which adds another row to increase from 243 to 1024 ways. Battlestar Galactica has a randomly triggered mode whereby the reels will also pay right to left for a number of spins! There are multitudes of ideas which can be incorporated into the 243way format.

What are the potential wins for 243way slots?
Due to the multiway set-up, slot developers can easily adjust the volatility by the values attributed to the symbols, but even more so with the bonus round potential. Immortal Romance will pay in excess of 10,000x stake for a full screen of wilds which can be achieved by a random wild reels feature and in one of the free games rounds, whereas Netent’s Twin Spin will pay a maximum of 1080x stake but will award wins in the middle range of 10-100x stake far more frequently.

Our Pledge
243wayslots.com have listed the multiway slots for you by developer and supplied good and reliable fast paying casinos in which to play them. Should you have a favourite, you can see who developed it and where it can be found. If you already have favourites, why not compare them to similar games and try something different? Go from Thunderstruck 2 to Medusa 2, or from Jurassic Park to Raging Rhino?